Big donation from the JAV of the BVG 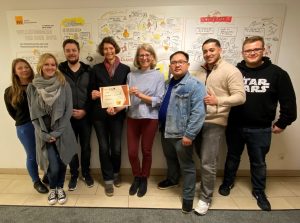 Donation handover at the JAV of the BVG

The youth and trainee representatives (JAV) of the Berliner Verkehrsbetriebe (BVG) presented us with a very generous donation on December 12th, 2019. At the annual cake bazaar organized by the JAV, which previously took place at different BVG locations in Berlin, donations totaling 2,200 euros were collected, which were distributed among three associations. Kindertraum eV , Tierschutzverein für Berlin eV and Aplastische Anemia & PNH eV each received 733.33 euros. A member of the JAV became aware of our association during the typing campaign on July 28, 2019 in Potsdam and then suggested us as one of the donation recipients.

We would like to thank the JAV very much for their great commitment and the donation and are pleased to be able to use the amount for the support of those affected and for public relations.

activitiesAplastic anemiaPNHsociety
Manage cookie consent
In order to provide you with an optimal experience, we use technologies such as cookies to store and/or access device information. If you consent to these technologies, we may process data such as browsing behaviour or unique IDs on this website. If you do not give or withdraw your consent, certain features and functions may be affected.
Manage options Manage services Manage vendors Read more about these purposes
See preference settings
{title} {title} {title}