On July 28, 2019, a typing campaign took place in the Potsdam Metropolis Hall, organised by RTL, Filmpark Babelsberg, UFA Serial Drama and DKMS . The reason was that the protagonist Laura from the television series “Gute Zeiten, Bad Zeiten” (GZSZ) fell ill with aplastic anaemia. When we arrived to set up our information booth, more than 200 GZSZ fans were waiting outside the entrance. Inside, volunteers were trained and the final organisational preparations were made. Many of the volunteers came from the GZSZ environment, e.g. relatives of actors.

It started at 12 o’clock. Part of the film team stepped outside on a small stage and two of the protagonists spoke directly to the fans about how important it is, but also how easy it can be to help people with aplastic anaemia and blood cancer. Then the typing campaign began. In small groups, the potential donors were allowed into the hall, where their data was recorded. A sample was taken from the oral mucosa with a cotton swab, which is later typed in the laboratory. After that, some of the actors stood ready to fulfill the autograph and selfie requests of the fans in a good mood and with tireless perseverance. 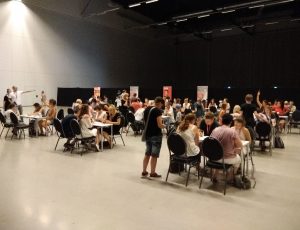 Big crowd in the typing hall

More than 4,600 potential donors had already registered online in advance. During the typing campaign, 484 more were recorded so that over 5,000 new possible bone marrow or stem cell donors could be added to the database. 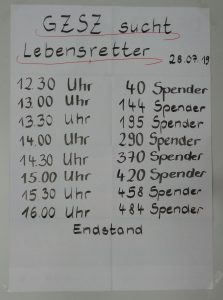 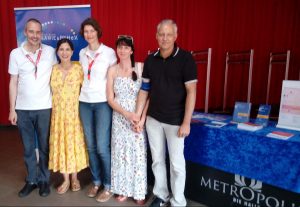 We were able to answer questions and provide information material to interested participants. We also had many interesting conversations and made contacts. We were very pleased to be able to talk to Chryssanti Kavazi, who plays the sick Laura, and to have a short interview with her.

AA & PNHeV: How did it come about that the disease aplastic anaemia appeared in the GZSZ series?
Chryssanthi: GZSZ repeatedly takes up socially relevant topics such as “bulimia” or “me too”. Here the authors of GZSZ wanted to work together with the DKMS and make a disease better known, against which something can be done, for example registering and possibly save someone’s life with little effort. That was very important to us. So we came across aplastic anaemia, which is very, very rare. We want people to know what aplastic anaemia is and what to do about it.

AA & PNHeV: How did you prepare for this role, for this situation, to have an illness that is extremely stressful?
Chryssanthi: I tried to read myself into it. You don’t understand much about it at first. And I met a really great boy who had leukaemia and that got me into the story a little bit. I also took a coaching session and watched films. It was all very, very nerve-wracking, it was a tough and very sad time. But I’m glad that the response is so great that people are registering. It all bears fruit and that’s great.

AA & PNHeV: What did the topic of a life threatening illness do to you?
Chryssanthi: A lot, I had long and very, very sad days of shooting, it was really tough. I am already a person who values her health very much and who is grateful that she is healthy. And in the evening I came home and it was very difficult to get out of this hole in which I was stuck as Laura. But I’ve always said to myself: There are really people who get sick from it. How are they actually? Then I thought: We’re helping these people, and that’s good and I’m just happy.

AA & PNHeV: Thank you very much and all the best!

activitiesAplastic anemiaInformation boothsTVTyping
Manage cookie consent
In order to provide you with an optimal experience, we use technologies such as cookies to store and/or access device information. If you consent to these technologies, we may process data such as browsing behaviour or unique IDs on this website. If you do not give or withdraw your consent, certain features and functions may be affected.
Manage options Manage services Manage vendors Read more about these purposes
See preference settings
{title} {title} {title}