On February 22nd, 2019, an exhibition of around 20 self-help groups including the Aplastic Anemia & PNH eV took place in the Mainz town hall from 9 a.m. to 1 p.m. as part of the day for rare diseases. The event was organized with the support of the city of Mainz and ACHSE eV from KISS Mainz and AHC18 + . The aim was to draw attention to the peculiarities of rare diseases. A disease is considered rare if fewer than 5 people in 10,000 are infected. All in all, the rare diseases are not that rare: In Germany, around 4 million people, ie around 5% of the population, are affected. A total of about 80,000 human diseases are known, of which approximately 8,000 are rare diseases. This means that these diseases are distributed over 4 million people: on average, there are 500 people affected per disease across Germany. This makes it clear that for every rare disease most doctors may only see one patient in the course of their professional lives.

Accordingly, the peculiarities that have to be considered when treating those affected are not known. Often times, the patient has to explain the illness and the associated sensitivities to the doctor in order to be treated appropriately. In addition, there are no medical guidelines or drugs available for many diseases. Those affected also receive treatments and medical aids for which there is no clear regulation for the assumption of costs by the health insurance. As a result, patients often have to fight for the assumption of costs in grueling disputes with the payers. 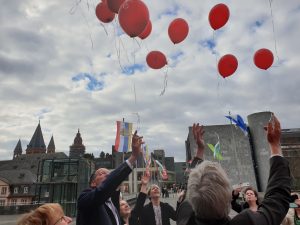 In order to improve the situation of those affected, on the day of the rare diseases public attention is drawn to their problems. In Mainz, Mayor Michael Ebling took over the patronage of the event and, together with his social affairs officer, Dr. Eckard Lensch the conversation with the representatives of the self-help groups. After the speeches by the city representatives, the participants traditionally let red balloons rise in front of the town hall accompanied by the press.

This was followed by a public training event for doctors on rare diseases. The focus was on rare metabolic diseases presented by specialists from Villa Metabolica and the Institute for Human Genetics at the Mainz University Medical Center. Although many of these mostly young patients can be treated well with medication, they go through an odyssey of years until they are correctly diagnosed. Then their body is often so damaged by the metabolic disorder that drug treatment can only prevent further aggravation. Thanks to the medical successes of recent years, diagnoses that are confirmed at an early stage can even enable an almost normal life. As a result, the family doctor, especially the pediatrician, has an important role to play: The timely recognition of unusual symptoms and the referral of the patient to a center for rare diseases .

The same applies to patients with PNH and / or aplastic anemia. Timely diagnosis and treatment in a specialized center are important factors in the success of the treatment. Especially patients whose therapy does not go as expected and who are dependent on long-term medical care need support in dealing with the disease, with their social environment and with the payers. The Aplastische Anemia & PNH eV offers information material and telephone advice , arranges meetings with other affected persons from the regional groups and supports the patients in political committees.

activitiesInformation boothssocietyTdSE
Manage cookie consent
In order to provide you with an optimal experience, we use technologies such as cookies to store and/or access device information. If you consent to these technologies, we may process data such as browsing behaviour or unique IDs on this website. If you do not give or withdraw your consent, certain features and functions may be affected.
Manage options Manage services Manage vendors Read more about these purposes
See preference settings
{title} {title} {title}